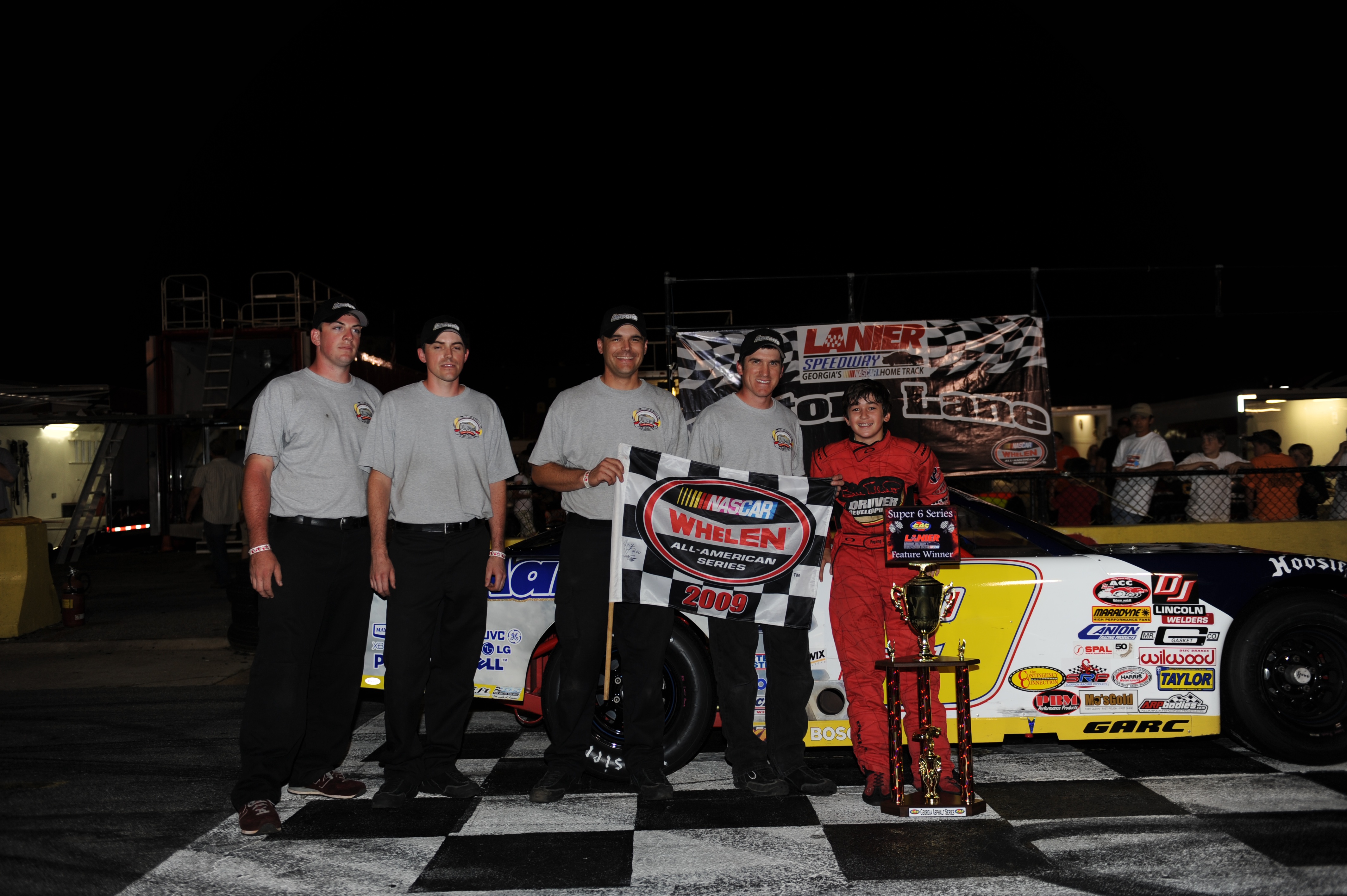 DAWSONVILLE, Ga. (May 11, 2009) – Appropriately enough, the rear bumper of Chase Elliott’s No. 9 Aaron’s Lucky Dog Dream Machine reads, “Nobody beats Aaron’s.”  Thirteen-year-old Elliott backed that up Saturday night at Lanier National Speedway (Braselton, Ga.) when he won his first career Late Model race in only seven starts.  After running second to his Bill Elliott Racing teammate Casey Roderick for 96 laps, Elliott took the lead and cruised to the win at his “home track” in the Georgia Asphalt Series (GAS) Super Six 100, just in time to give his mom, Cindy Elliott, the perfect Mother’s Day gift.

As the tradition continues from Bill to his son Chase Elliott, the same fans that made Awesome Bill from Dawsonville the Most Popular Driver for 16 years went wild when the second-generation driver made the pass around Roderick and crossed the finish line in front of his hometown fans.  Hearing news of the momentous win, Gordon Pirkle at the Dawsonville Pool Room sounded the siren through the streets of old Dawsonville, as he has following every Elliott win.

“I was up in the spotters’ stand, and at first I didn’t know who the crowd was cheering for,” Bill Elliott said.  “That was until I saw Chase pull up beside Casey for the pass and the crowd went wild.  It was unbelievable for me to experience the fans that have supported me throughout my career out here cheering on my son now.”

“That was a heck of a race, I’m just so excited,” Chase Elliott said after climbing out of his car in Victory Lane.  “The car was getting loose there at the end, and I knew I had just one chance to get around Casey and make it stick – so it had to be the right time.  I set him up and got under him just enough to move him up the track and not wreck either of us.  From there I just hit my marks and took it easy until we took the checkers.  I just can’t believe it – this is awesome.  I can’t thank everyone enough, my mom and dad, everyone on the team and especially Aaron’s and all of our sponsors for supporting us.”

The Aaron’s Dream Machine was fast from the time the team unloaded at Lanier.  Elliott was fourth fastest in the first 30-minute practice, and he topped the speed charts in the second session with a 14.128-second lap.

Elliott rolled off fifth out of 17 cars during qualifying and was the first driver to post a lap in the 13.9-second range, clocking in at 13.911 and putting himself atop the leader board.  Elliott’s fast lap held up through 11 more cars until his BER teammate Casey Roderick, the final car to qualify, posted a 13.879-second lap to claim the pole, bumping Elliott to second.

The BER teammates lined up side-by-side to lead the 17-car field to the green, and Elliott quickly jumped to the inside and tucked in behind Roderick.  Roderick was able to pull ahead to a four car-length lead over the Aaron’s Dream Machine, but Elliott never let Roderick out of reach.

A lap 18 caution bunched the field up again and allowed Elliott to report to his crew that the car was great and he was saving it for the end.

Following a messy restart, the race was red-flagged for a spin in turns one and two while track workers cleared the debris.  On the subsequent restart, Roderick and Elliott were able to pull away from third place Paul Kelley.  By lap 34, the leaders caught lap traffic, but Elliott was able to clear with no problems.

During a lap 50 caution, Elliott reported to crew chief Ricky Turner that the Aaron’s Dream Machine was starting to get free rolling through the center of the turns, but he thought he could try to change his driving to correct the problem.

On the final restart, Roderick jumped out to the lead and Elliott again fell in closely behind as the two pulled away from the rest of the field.  By lap 64, the No. 19 and No. 9 pulled out to a five car-length lead over Kelley in third.

Elliott slowly gained on his teammate, and by lap 70, he pulled up to the back bumper of the No. 19.  Elliott’s spotter, dad Bill Elliott, advised his son to follow Roderick for a while and save his tires for a late race run for the lead.  On lap 85, the elder Elliott radioed to his son to set Roderick up for the pass at the end because, with a loose race car, Elliott would only have one chance to get around the No. 19 and make it stick out front.

Ten laps later, Elliott took a look to the inside of the No. 19 but wasn’t able to get under him.  The following lap, Elliott stuck his nose under Roderick going into turn three, moving the No. 19 up the track just enough for Elliott to pull under.  The two raced side-by-side out of turn four, and Elliott officially led for the first time on lap 97 of 100.

From there, Elliott hit his marks around his “home track” and crossed the line 0.513 seconds ahead of his teammate to claim his first Late Model victory in only seven starts.